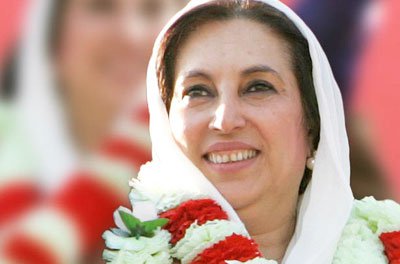 TODAY is the 8th death Anniversary of a great and bold woman politician of Pakistan who struggled very hard under shadow of most cruel and dictatorship General Zia ul Haque government of Pakistan for the restoration of Democratic Govt of Pakistan and she also remained in imprisoned for six year upto 1984 but she did not loose his heart and she had never felt any fear from General Zia ul Haque. and she had continued his true mission and at last , she had achieved his goal of mission for restoration of democratic government in this Islamic country of Pakistan.

Be Nazeer Bhuttu was born on 21-06-1953(Sunday) in Karachi in Dr PINTO Hospotal Karachi and she was assassinated on 27-12-2007(THURSDAY) evening at Liaqat Bagh Rawalpindi. 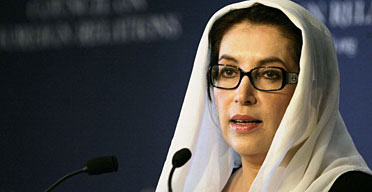 She then went abroad and educated at Harward university,
Lady Margarate Hall College and St Catherine College and obtained the BA degree in social Science, international affairs etc from 1969 to 1973.

She then was educated in England at Oxford University,
Red Clliffe College and studied the courses of Philosphy, Politics and economics from 1973 to 1977 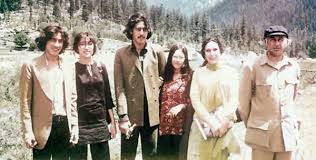 Her father Z.A.Bhuttu was executed on April 4, 1979 in a murder case but She and her mother were already in jail from 1977 up to 1982. However , both mother and daughter were being struggled very hard for the restoration of Democracy Government in Pakistan

Be Nazeer was also remained in prison along with her mother Begum Nusrat Bhuttu (Late) when his father was hanged to death/executed on April 4 ,1979. (WEDNESDAY)

Soon after execution of her father, Nusrat Bhuttu (Late) was made Chairperson of PPP and both mother and daughter had struggled very hard for the restoration of Democracy inside jail while most of the members had become isolated from PPP

I think that No other any politician has struggled so hard for the restoration of Democratic Government as it was struggled by only one & one great and most intelligent and most bold young women Be Nazir Bhutto (Late) & her mother Nusrat Bhuttu (Late).

Although she was even being the daughter of a great land lord and most wealthy and most influential political family but she was one of the most polite, sociable and most generous women of Pakistan . She was not a TAKABER PASAND (Proud) woman and I have always observed in the TV News Channel that she had never made any hesitation to meet the poor peoples of Pakistan. She always used to meet every person and used to listen their genuine grievances and always tried to redressed their all genuine problems and grievances etc because of the a real fact that she was one of the most generous, polite nature woman and she always like to meet every person of Pakistan (As far as possible) for listening their views and problems and she always tried to redressed their all the genuine and justified grievances at the spot.

She was a generous , kind hearted and most sincere friend of poor people of Pakistan and she had always paid utmost attention in solving their genuine problems and grievances of the poor people of Pakistan on top priory basis and specially in the field of all social types and welfare types works i.e education for all, health facilities for all, restoration of women rights and providing them suitable jobs in all the government departments and he had set up one independent ministry for the women development and ministry of youth affairs and she had also established FIRST WOMAN BANK and she had provided many Nos of good jobs to youth and women in both government and private departments and she had also provided free interest loan to PURDAH NASHEEN widows and poor women of Pakistan from her personal fund for encouraging poor women to set up their own small industrial homes in their own houses .

Syed Khurshid Shah MNA was remained my bosom friend and we both had being remained in Wapda Sukkur circle of Hyderabad region and we both ( i.e I & Syed KHURSHID Shah) used to play cricket in the ground of DC Power House Sukkur . Syed Khurshid Shah is one of the most excellent person of sukkur ,He was most hard worker member of PPP and he always used to work as a social worker and take care of every person of Sukkur. Hence it was the main reason that he become MNA for six times . It is the main proof of his popularity among the people of Sukkur,

Similarly, Abdul Qadir Bhuttu ,( who was first cousin of Z.A.Bhurru ) and proprieter of Indus Hotel Sukkur was also remained onr of the my most best friend and as such, both persons ie Syed Khurshid Shah and Abdul Qadir Bhuttu , both always take my most care and to help me in Sukkur.

In those day, I was living in a small house on Royal Road Sukkur. There was existed the house of Abdul Hafeez Pirzada, Federal Minister of Education , Abdul Haleem Pirzada Advocate . She was also most excellent persons of Sukkur.

In those day ie in year 1977, I had received my first Prize of TYFON Award of HEARALD Competition of Monthly Herald. I denoted my this prize to Z.A. BHUTTU Flood Relief Fund. The news of this a good noble cause was also appeared in all the Urdu and English newspapers of Pakistan and weekly magazine of AKhbar Jehan Karachi.

The Prime Minister of Pakistan Z.A. Bhuttu had appreciated my this donation and had thanked upon my this noble act. One day, Z.A. Bhuttu had visited the house of Abdul Haleem Pir Zada Sukkur and he told him to convey my massage of thank to Raja Ghazanfar Ali Khan ,

One day, I was going to my office . That on the way, Abdu Haleem Pir zada met me on the way and he had conveyed the massage of Thank of Z.A.Bhuttu (Late) to me . Hence I was much impressed of most polite and good moral character of a great political leader of Pakistan Z.A.Bhuttu (Late)
Hence it was the main reason that Be Nazir Bhuttu was also a great woman leader of the Pakistan and she was also one of the most excellent and most polite nature woman of Pakistan and she was also a true copy of her father Z.A.Bhuttu.

It is a clear proof that the memory of Z.A. Bhuttu was most wonderful just like Hitler and CHUL CHUL and General Montgomery.

It is said that Hitler has a force of 35000 Nos of army man. He knew the names of every army man person and he also recognized the voice of every Army man talking out side of his (Hitler) office.

Hence the same quality was also existed in Z.A. Bhuttu. He had also known the names of every PPP worker and person of Pakistan. 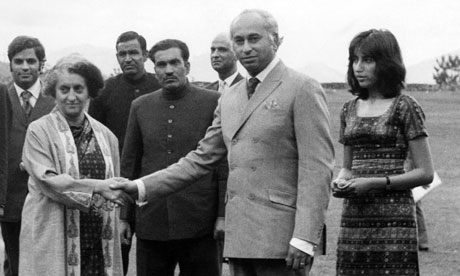 Be Nazeer Bhuttu has remained the Prime Minister of Pakistan twice times.

Dhe then remained leader of Opposition from 17-02-1997 upto12-10-1999.
During government of Nawaz Sharif,But his government was ousted by General Perwaiz Mushraf on 12—10-1999 and he dissolved the National Assembly.

After then, she passed an exile life in Dubai till Oct 2007. She then come back in Pakistan for the election but she was assassinated on 27 Dec 2007 at liaqat Bagh Rawalpindi and she was buried in Larkana beside her father grave.

She was married with ASIF ALI ZAEDARI in 1988.She has one son and two daughter . 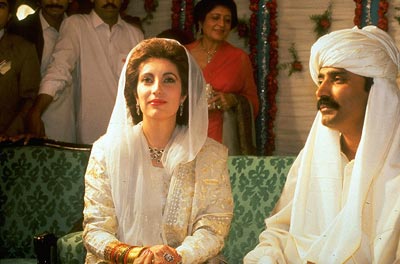 Benazeer Bhuttu was belonged to most prominent respectable and the educated family of a good blooded family. She was born on 21th june 1953 Monday in Karachi and she was assassinated in Liaqat Bagh Rawalpindi on 27 December 2007 Thursday evening .

However It is a matter of great astonish and surprise that who had assassinated her in spite of Strict security of him and completely cordoned off of all areas of Liaqar Bagh areas of JALSA GAH by posting of heavy police duty for the secured security staff of this great political leader of Pakistan and why government of Pakistan could not try to trace the murderer so far even elapsing of Eight years of period since that time and even being remained the government of her her spouse Asif Ali Zardari who also remained the 13th president of Pakistan from 9th September 2008 up to 8th September 2013. 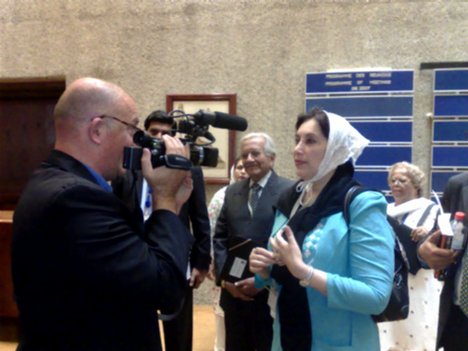 Such Great leaders are seldom born in this world, His Speaking power and writing was very strong and I appreciate her good leadership and her many nos of marvelous and wonderful characteristics of qualities