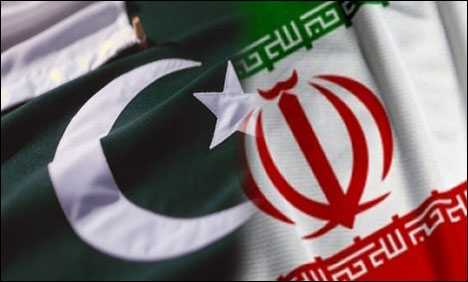 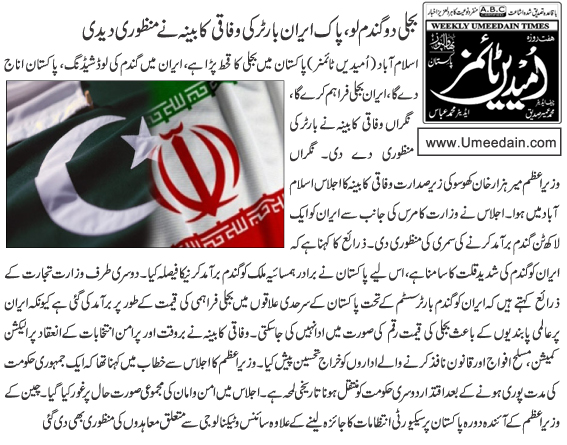 ISLAMABAD (Umeedain Times): Islamabad has authorized the export of 100,000 tonnes of wheat to Iran in trade not jeopardised by Western sanctions, to settle dues for electricity supplied to Pakistan’s energy-starved border areas, the Commerce Ministry said on Friday.

The shipment of 100,000 tonnes was to have been delivered to Iran in mid-February but was delayed by preparations for Pakistan’s May 11 election.

“The wheat is being given to Iran against the outstanding payment of $53 million for electricity supplied to Pakistani border areas from the Iranian grid,” ministry spokesman Mohammad Ashraf said.

“The interim cabinet has approved the decision and exports will be initiated as early as possible.”

The European Union and the United States have imposed toughened sanctions meant to discourage Tehran’s nuclear programme, which they say has a military purpose. Iran rejects that claim, saying its programme aims at the peaceful production of electricity.

Western sanctions do not target food shipments, but financial measures have frozen Iranian companies out of much of the global banking system, hindering payments for imports, on which Iran relies for much of its food.

Pakistan is battling a chronic energy shortage, which is inflaming public anger and stifling industry. Power outages can last eight to 10 hours a day in cities, with much more frequent cuts in rural areas.

Electricity from Iran costs Pakistan around $3 million a month and is supplied to towns near the Iranian border, including the port city of Gwadar. (Reuters)